Madison Nicole Ziegler is a 11 year old dancer who appears on the show Dance Moms.  Maddie Ziegler was called Taylor for the first two days of her life.  She is Polish, Italian and German.  Her birthday is September 30th 2002.  Her parents names are Kurt Ziegler and Melissa Ziegler. However, Melissa is now engaged to Greg Gisoni.  Greg is the Nuclear Services vice president & project director at Westinghouse Energy Center.  Melissa is a regular on Dance Moms and Kurt has been on Dance Moms once, Kurt wants to take Maddie and Mackenzie out of Abby Lee Miller’s dance studio.  Maddie lives in Murrysville, PA and dances for the Abby Lee Miller Dance Company in Penn Hills, PA.   Maddie does all styles of dance, Jazz, Tap, Lyrical, Modern, Pointe and Acro.  Maddie Ziegler started dancing at just 2 years old, and started dancing at Abby Lee Miller Dance Company when she was 4.  Her favorite styles of dance to perform are Lyrical and Tap and those are what she wins her titles for.  She performed mostly Lyrical solos during seasons 1 and 2 of Dance Moms.  Her favorite thing about dance is learning new routines and performing on stage.  Maddie Ziegler wants to be a professional dancer when she grows up, either on Broadway or as a choreographer. Her favorite subject in school is Math and her favorite color is neon blue, pink and purple.  She has a younger sister Mackenzie Ziegler who is 7 and also dances on Dance Moms.  Maddie also two half brothers Tyler and Ryan Ziegler.  Maddie also has two future step siblings Michele and Mathew Gisoni.  Maddie has a Twitter page and Instagram but does not have a Facebook.  Maddie had to delete her Facebook because of the fame she got from being on Dance Moms, she could not keep up with all the fans.  Maddie’s nickname is Maddawg. Her goal for the year is to win Elite Dancer at West Coast dance Explosion. 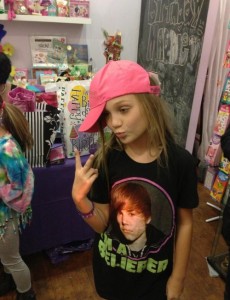 The Ziegler’s have a room in their house called “the store” that houses all their dance clothes, costumes, and jewelery. Her mom, Melissa Ziegler  has a Twitter.  In high school Melissa was a cheerleader and on student council.  Maddie takes singing lessons but does not have time for anything else because of dance!  She is in 5th grade at Sloan Elementary School.  In season one of Dance Moms Maddie was undefeated all season 1 except for one  dance competition.  Before Dance Moms ever started she won many awards and titles in 2009, 2010 and 2011.